3D
360°
Scan The World
2,920 views 403 downloads
3 collections
Community Prints Add your picture
Be the first to share a picture of this printed object
0 comments

A short life that of the sculptor Pietro Freccia (1814-1856), a life dedicated to marble from the early years, a life that was opening to fame and success, but which was tragically interrupted at the age of thirty-two, later an accidental fall from a scaffolding on which he was working to complete the well-known Monument to Christopher Columbus, place in Piazza Acquaverde in Genoa. We were in 1854; after two years, due to the serious injuries suffered, he died. The cruelty of destiny did not allow him to continue on a promising path, with his marvelous works, born in the wake of Lorenzo Bartolini's masterly vocabulary, in which, however, the careful and meticulous analysis of the truth, even with a matrix implantation classic, it would have led to different stylistic outcomes. And it is precisely in the presence of one of his works, Love and Fidelity , of 1840, currently preserved in the Modern Art Gallery of Palazzo Pitti in Florence that the artist's language can be comprehensively understood. A child, personification of Love, appears seated on an ideal trunk while looking back, veiled with tears restrained, towards the loyalty, represented by a lifeless dog at his feet. The quiver with all the arrows is abandoned. Love can no longer hit with its unpredictable arrows.

The anacreontic theme, as well as the structural and stylistic construction of the figure do not deviate from the dictates of neoclassical poetics even if a warm and familiar thrill runs from within the icy marble, making tangible human pain of the mythological character who suffers visibly in the presence of the figuration, real and tangible, of the Fidelity , a dog that in the last yearning of life chooses to rest the head on the child's foot, seeking in this last physical contact a safe harbor to wonder that life to all we impose. 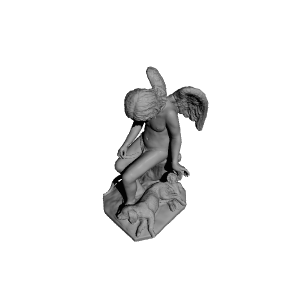