The Capitoline Brutus at The Réunion des Musées Nationaux, Paris

3D
Scan The World
3,741 views 198 downloads
Community Prints Add your picture
Be the first to share a picture of this printed object
0 comments

The Capitoline Brutus at The Réunion des Musées Nationaux, Paris

In 1564, Cardinal Pius da Carpi donated to the museum the magnificent bronze portrait of extraordinary expressive force. The identification of the statue with Junius Brutus, the first Roman consul, represents an astute interpretation of the antiquarian culture. However, this assertion is without any real foundation.

The Capitoline Brutus is an ancient Roman bronze bust commonly thought to depict the Roman consul Lucius Junius Brutus (d. 509 BC), usually dated to the late 4th to early 3rd centuries BC, but perhaps as late as the 2nd century BC, or early 1st century BC. The bust is 69 cm (27 in) in height and is currently located in the Hall of the Triumphs within the Capitoline Museums, Rome. Traditionally taken to be an early example of Roman portraiture and perhaps by an Etruscan artist influenced by Hellenistic art and contemporary Greek styles of portraiture, it may be "an archaizing work of the first century BC". The Roman head was provided with a toga-clad bronze bust during the Renaissance.

This was scanned from a plaster cast of the original at the Réunion des Musées Nationaux, Paris.

Printed by PRINT3Dforum.com Printing Services - Slight supports required. Other than that, pretty much straightforward print. 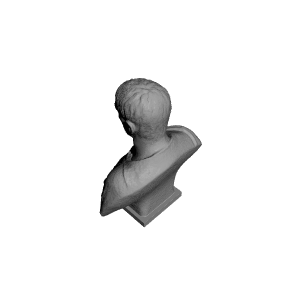 ×
0 collections where you can find The Capitoline Brutus at The Réunion des Musées Nationaux, Paris by RMN