3D
Scan The World
2,913 views 270 downloads
Community Prints Add your picture
Be the first to share a picture of this printed object
0 comments

This is a bronze sculpture of a chimney sweep. The chimney sweep is depicted in a moment of walking, possibly to work, holding his rope brush.

A chimney sweep is a person who clears ash and soot from chimneys. The chimney uses the pressure difference caused by a hot column of gas to create a draught and draw air over the hot coals or wood enabling continued combustion. Chimneys may be straight or contain many changes of direction. During normal operation, a layer of creosote builds up on the inside of the chimney, restricting the flow. The creosote can also catch fire, setting the chimney and the building alight. The chimney must be swept to remove the soot. This was done by the master sweep.

In Great Britain, the master sweeps took apprentices, typically workhouse or orphan boys, and trained them to climb chimneys. In the German States, master sweeps belonged to trade guilds and did not use climbing boys. In Italy, Belgium, and France climbing boys were used. 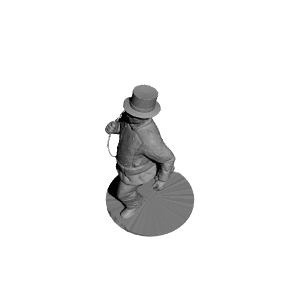