3D
360°
Scan The World
3,985 views 481 downloads
8 collections
Community Prints Add your picture
Be the first to share a picture of this printed object
0 comments

Foggini was the most significant sculptor in Florence around 1700, alongside Soldani. Active as architect and sculptor, he was appointed Court Sculptor to the Medici in 1687 and First Architect seven years later. Foggini is credited with having introduced Roman Baroque influences to Florentine sculpture, resulting from his training in the newly formed Accademia Fiorentina in the Eternal City. In his official duties to the Medici, Foggini took charge of the Borgo Pinti foundry and he is perhaps best known today for his elegant bronzes. He was also responsible for the Galleria dei Lavori, that produced the famous Florentine hardstone commessi, to which he brought a refined sense of sumptuous ornamentation, combined with sculptural integrity, a sense of style that is also expressed through his large surviving corpus of drawings.Despite the physical limitations of a childhood disease which restricted growth in his legs, Foggini produced a small number of high quality, large works in marble, notably the Corsini Chapel in S. Maria del Carmine, the Feroni Chapel in SS. Annunziata, and the monument to Galileo Galilei in Santa Croce, all at Florence.

It is with reference to large scale marble works like these, as well as Foggini’s marble busts, that the attribution of the present, exceptional marble figures is to be judged. The sumptuous marble bust of Ferdinando de’ Medici in the Metropolitan Museum of Art, New York, dated to the early 1680s, presents several affinities in the approach to the carving, in particular with the figure of Lucretia, in the focus on the contrasts in polish between the smooth skin and the broad carving of the hair, handled with a matte finish. The attention to detail in the richly carved lace worn by the Grand Duke finds parallels with the precise carving of the decorative urn placed next to Pompeia Paulina.

Whilst the scale of the present pair of marble Roman tragic heroines appears to be unique in the currently known oeuvre of Foggini, comparisons for the depiction of standing female figures are evident in the two allegorical figures flanking the tomb of Galileo Galilei. Although monumental in size, these figures share in common with the present marbles a swaying contrapposto, voluminous drapery arranged in sharp, broad folds, notably close to the treatment of Pompeia Paulina, and their small heads twisted upwards with imploring expressions. The more complex arrangement of drapery of Lucretia finds more direct similarities with the bunched folds on the seated allegorical female figures in the Feroni Chapel.

A wax model of Pompeia Paulina is recorded in the catalogues of the Doccia factory as by Giovan Battista Foggini (Lankheit 1982, op. cit). This has been contested by Sandro Bellesi (Bellesi, op cit.) in favour of an attribution to the Lombard sculptor, Antonio Calegari (1699-1777). However, since the precise composition of Pompeia Paulina was the inspiration for a painting of Susanna by Edmond Plumier (1671-1733) in Maastricht Town Hall, dated 1720, Calegari would certainly have been too young to have created a model that would have had such international influence by that date. The replica of Pompeia Paulina is known in a signed marble by the Sicilian sculptor Vincenzo Vitagliano, an exact contemporary of Calegari, which also confirms that the fame of the model was from an earlier generation (Bacchi, op. cit.). A wax figure of Lucretia identified as by Foggini also survives in the Doccia collection (Lankheit 1982, op. cit), but it is a different model from the present one.

These marbles were reputedly once in the Villa La Tana Ricasoli, the residence of Pietro Bonaventura and Bianca Cappello, the mistress of Francesco I de' Medici. Purchased in 1631 by Leon Francesco Pasquale Ricasoli, the villa was renovated by Giulio Foggini, the brother of Giovan Battista Foggini.

Lucretia and Pompeia Paulina represent a noble feminine pairing of high moral Roman tragic heroines. They must have been commissioned from Foggini with a specific instructive intention.

The Story of Lucretia

The death of Lucretia has been regarded as a catalyst for the fall of the Roman monarchy and subsequent establishment of the Republic around 509 BC. The wife of Lucius Tarquinius Collatinus, governor of Collatia, Lucretia’s rape by the Etruscan Sextus Tarquinius, a son of the king of Rome, is an historical legend that is told in different versions. After Tarquin’s assault, Lucretia beseeched her father and husband for revenge. Whilst debating their response Lucretia killed herself by plunging a dagger in her heart. Her noble self-sacrifice inspired the Romans with admiration and compassion to rise up and overthrow the monarchy. Lucretia’s story has been popular with artists since the Renaissance, with notable examples painted by Botticelli, Raphael, Titian, Dürer and Rembrandt.

Foggini shows Lucretia in dramatic action as if her decision to take her life after her confession is sudden and spontaneous. As she turns her head it appears as if her final cry is for justice and revenge. 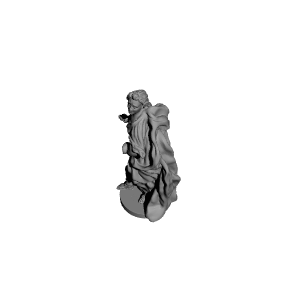