3D
Scan The World
2,066 views 100 downloads
Community Prints Add your picture
Be the first to share a picture of this printed object
0 comments

The Greek term 'acrolith' means a votive image in which the body is made of metal-plated wood and only the projecting parts (head, hands and feet) are of marble. Holes along the upper edge of the forehead, in the earlobes, in the hairstyle and on the sides of the neck were used to insert jewellery and precious fabrics to adorn the statue.

The goddess was probably seated on a throne, like small votive terracottas found in sanctuaries in Greece and Magna Graecia. Stylistic comparisons allow us to date the sculpture to the decade of 480-470 B.C. The head has been identified as Aphrodite or Persephone, perhaps from Locri Epizefiri, like the Ludovisi Throne (also available on Scan the World).

Both pieces were brought to Rome after the conquest of southern Italy to decorate the temple of Venus Erycina on the Quirinal Hill, in the same area where the Horti Sallustiani and, later, the Villa Ludovisi were located. 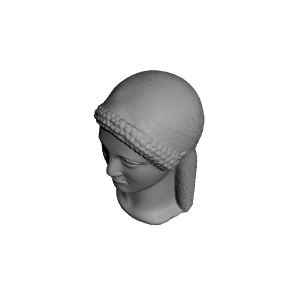