3D
Scan The World
1,100 views 52 downloads
2 collections
Community Prints Add your picture
Be the first to share a picture of this printed object
0 comments

This sculpture depicts Apollo, the ideal of the kouros (a beardless, athletic youth), who has been variously recognized as a god of music, truth and prophecy, healing, the sun and light, plague, poetry, and more. Apollo is the son of Zeus and Leto and has a twin sister, the chaste huntress Artemis.

The statue was purchased for the Ludovisi collection at the Villa Ludovisi. The Villa Ludovisi was a suburban villa in Rome, built in the 17th century on the area once occupied by the Gardens of Sallust (Horti Sallustiani) near the Porta Salaria. On an assemblage of vineyards purchased from Giovanni Antonio Orsini, Cardinal Francesco Maria Del Monte and others, Cardinal Ludovico Ludovisi erected in the 1620s the main villa building to designs by Domenichino; it was completed within thirty months, in part to house his collection of Roman antiquities, additions to which were unearthed during construction at the site, which had figured among the great patrician pleasure grounds of Roman times. 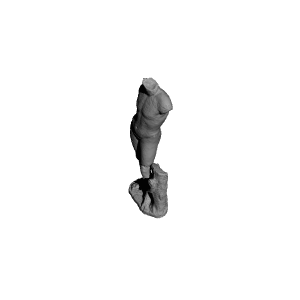