3D
Scan The World
2,359 views 114 downloads
Community Prints Add your picture
Be the first to share a picture of this printed object
0 comments

The front of the three-sided relief portrays the birth of Aphrodite from the sea-foam, held by two Horai, divinities of nature and seasons, wearing a peplum (on the left) and a chiton (on the right). On the right side a young nude female figure plays a double flute; on the left side, a woman wearing a mantle places incense in a burner. Both figures have been identified as priestesses of Aphrodite, representing sacred and profane love.

The term 'throne' dates to the time of the finding of the piece near Via Sardegna (Rome). Thought to be a throne of a divinity or an enclosure for a colossal votive statue, or a balustrade for a stairway, it was finally identified as the upper part of an altar. Another interpretation identifies the frontal figure as Persephone, who returns ever Spring to the Earth from the Underworld, repeating the endless cycle of the seasons. Stylistic analysis of the relief and comparison with terracottas from Magna Graecia date the sculpture to 460-450 B.C., perhaps from Locri Epizefiri, like the Ludovisi acrolith. 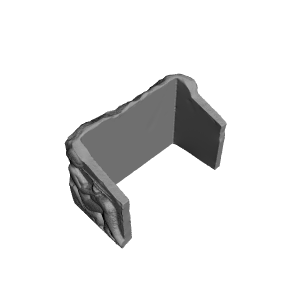