3D
360°
Scan The World
1,908 views 188 downloads
2 collections
Community Prints Add your picture
Be the first to share a picture of this printed object
0 comments

This is a sculpture depicting Apollo, one of the most important and complex of the Olympian deities in classical Greek and Roman religion and Greek and Roman mythology. The national divinity of the Greeks, Apollo has been variously recognized as a god of music, truth and prophecy, healing, the sun and light, plague, poetry, and more. Apollo is the son of Zeus and Leto, and has a twin sister, the chaste huntress Artemis. Seen as the most beautiful god and the ideal of the kouros (a beardless, athletic youth), Apollo is considered to be the most Greek of all gods. Apollo is known in Greek-influenced Etruscan mythology as Apulu

As the patron of Delphi (Pythian Apollo), Apollo was an oracular god—the prophetic deity of the Delphic Oracle.

Medicine and healing are associated with Apollo, whether through the god himself or mediated through his son Asclepius, yet Apollo was also seen as a god who could bring ill-health and deadly plague.

As an archer who never missed, Apollo carried a golden bow (silver bow, sometimes) and a quiver of golden arrows. As the inventor of archery and taught the same to the people. His arrows could inflict harm by causing sudden deaths or deadly plague.

As the leader of the Muses (Apollon Musegetes) and director of their choir, Apollo functions as the patron god of music and poetry. He is the inventor of string-music. The Cithara and the lyre are also his inventions. The lyre is a common attribute of Apollo 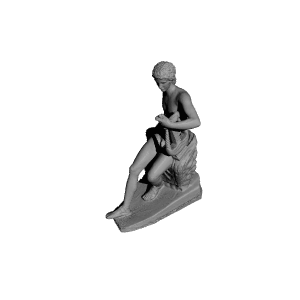 ×
2 collections where you can find 'Ludovisi-type' Apollo, with ancient head of the 'Apollo-Chigi' type by Scan The World