3D
Scan The World
1,605 views 52 downloads
Community Prints Add your picture
Be the first to share a picture of this printed object
0 comments

Wagner's Lying Torso concludes a period in the artist's work connected with lyrical and imaginative sculptures of torsos, and opens a new stage of poetic allegories of the sorrow and anguish of the Czech Lands, in connection with the imminent danger of the Second World War. The incredibly delicately modelled torso of a lying female figure, partially veiled by drapery, stresses the sculptural revelation of the living human body out of stone. It has been suggested that the internally harmonious forms of the torso, over whose surface light is softly diffused, resembles the relief of a landscape. In that sense, Lying Torso is a metaphor for the archetypal unity of man and nature (the Earth), but also of time (transformation), the birth of life and beauty. Every inch of this sculpture, imbued with ardent feeling, breathes with life. 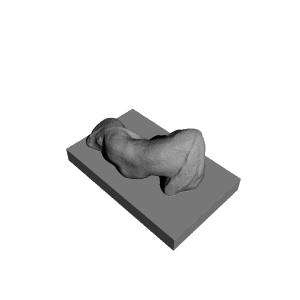