Lynch at the Middelheim Museum

3D
Scan The World
1,952 views 70 downloads
Community Prints Add your picture
Be the first to share a picture of this printed object
0 comments

Lynch at the Middelheim Museum

Reinhoud of Haese , was born in 1928 and died in Geraardsbergen on July 1, 2007 in France , is a Belgian sculptor , member of the CoBrA group. He made his debut in Brussels to a goldsmith, and then attended the National School of Architecture and Decorative Arts where he learned metal work sculpture. In 1950 he joined the Marais workshops in Brussels, a kind of incubator of the Cobra group, where he is actively involved in the transformation workshops center to receive artists. There he met, among others, Christian Dotremont, Luc de Heusch, Alechinsky and Hugo Claus, who will accompany artists throughout his career. After the dispersion of the Ateliers du Marais, the experimental gallery Taptoe in Brussels in 1956 organized an exhibition devoted entirely to Reinhoud. He received the award from the Belgian Critical. What inspires these are insects: Mosquito and Snoop are the titles of works he exhibited there. From that time Reinhoud will increasingly unleash his imagination, to create a sculpture gallery, animals, plants, and especially the characters, so characters catalog in the tradition of The Heather.

Most of his sculptures are remarkable and enigmatic titles like It lacks only the floor must sing in Chinese, or where there is talk of a double bass, Misses James and a slice of apple. In total, over 3,000 sculptures - all unique pieces of brass, copper, ceramic, wood or even bread - where Reinhoud exposes us his fantastic bestiary in trouble, his vision of man somewhat mocking all rooted in the living daily without hiding anything from its roots by Brueghel or Bosch CoBrA. End 2010 - 2011 first retrospective exhibition dedicated to him at the Royal Museums of Fine Arts in Brussels marking which includes a sample of his sculpted works and drawings from the 1960s to the 2000s.

This print needs some supports and low speed at the top layers. 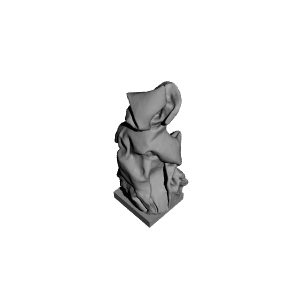