3D
Scan The World
15,449 views 2,052 downloads
19 collections
Community Prints Add your picture
Be the first to share a picture of this printed object
0 comments

Zurab Tsereteli (born 1934), the author of this graceful sculpture, is a Georgian-Russian painter, architect and sculptor. He is known (and often mocked) for his large monuments, his most popular piece is Peter the Great in Moscow. He has been the President of the Russian Academy of Arts since 1997 and is generally known as a controversial artist.

This sculpture in particular is quite simple, and portrays a slender woman dancing in pointe shoes, specifically Soviet ballerina and choreographer Maya Plisetskaya. The bronze form beautifully shows an array of different textures. 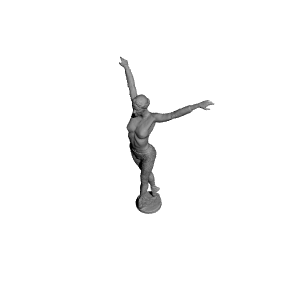 ×
19 collections where you can find M. Plisetskaya by Scan The World