3D
Scan The World
2,650 views 142 downloads
Community Prints Add your picture
Be the first to share a picture of this printed object
0 comments

This marble sculpure was carved by Thomas Boudin (Paris, around 1570 - Paris, 1637), depicting Madeleine Marchand, the wife of President Le Jay (1603 - 1625). 1.3 x 0.64 x 1.08m. It is a funerary statue discovered at the tomb and commissioned by Nicolas Le Jay, President of the parliament of Paris, for his wife in the church of the Minimes in the Place Royale in Paris. It was created by Thomas Boudin after signing the contract of the 15th July 1628, whilst the statue of Nicolas Le Jay (whose only remaining bust) was created later by Peter II Piard. 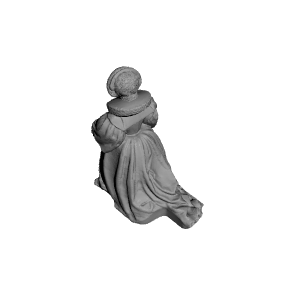 ×
0 collections where you can find Madeleine Marchand at the Louvre, Lens by Scan The World