3D
Scan The World
7,532 views 541 downloads
2 collections
Community Prints Add your picture
Be the first to share a picture of this printed object
0 comments

A Madonna is a representation of Mary, either alone or with her child Jesus. These images are central icons for both the Catholic and Orthodox churches. The word is from Italian ma donna, meaning 'my lady'. The Madonna and Child type is very prevalent in Christian iconography, divided into many traditional subtypes especially in Eastern Orthodox iconography, often known after the location of a notable icon of the type, such as the Theotokos of Vladimir, Agiosoritissa, Blachernitissa, etc., or descriptive of the depicted posture, as in Hodegetria, Eleusa, etc.

The term Madonna in the sense of "picture or statue of the Virgin Mary" enters English usage in the 17th century, primarily in reference to works of the Italian Renaissance. In an Eastern Orthodox context, such images are typically known as Theotokos. "Madonna" may be generally used of representations of Mary, with or without the infant Jesus, is the focus and central figure of the image, possibly flanked or surrounded by angels or saints. Other types of Marian imagery have a narrative context, depicting scenes from the Life of the Virgin, e.g. the Annunciation to Mary, are not typically called "Madonna".

The earliest depictions of Mary date still to Early Christianity (2nd to 3rd centuries), found in the Catacombs of Rome. These are in a narrative context. The classical "Madonna" or "Theotokos" imagery develops from the 5th century, as Marian devotion rose to great importance after the Council of Ephesus formally affirmed her status as "Mother of God or Theotokos ("God-bearer") in 431. The Theotokos iconography as it developed in the 6th to 8th century rose to great importance in the high medieval period (12th to 14th centuries) both in the Eastern Orthodox and in the Latin spheres. According to a tradition recorded in the 8th century, Marian iconography goes back to a portrait drawn from life by Luke the Evangelist, with a number of icons (such as the Panagia Portaitissa) claimed to either represent this original icon or to be a direct copy of it. In the Western tradition, depictions of the Madonna were greatly diversified by Renaissance masters such as Duccio, Leonardo da Vinci, Michelangelo, Raphael, Giovanni Bellini, Caravaggio and Rubens (and further by certain modernists, such as Salvador Dalí and Henry Moore) while Eastern Orthodox iconography adheres more closely to the inherited traditional types. 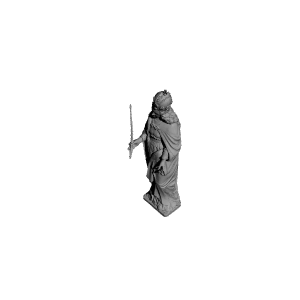 ×
2 collections where you can find Madonna by Scan The World