3D
Scan The World
1,332 views 107 downloads
1 collection
Community Prints Add your picture
Be the first to share a picture of this printed object
0 comments

Pagno di Lapo was born at Fiesole, near Florence. In 1426-28 Pagno di Lapo was working as a stone-cutter in the joint shop of Donatello and Michelozzo in Pisa, during the production of the Coscia and Brancacci tombs. In 1428 he collaborated with two obscure stone-cutters on the decorative elements of the baptismal font in the Duomo of Siena, and as a garzone in Donatello's shop in connection with the resumed work on the pulpit for Prato, 1434. In Florence he was occupied between 1448 and 1451 with decorative carving executed concurrently for the Basilica of San Lorenzo and Palazzo Medici (both projects under Michelozzo again). Documents show that he was working on chapels for the Basilica of San Petronio in Bologna between 1451 and about 1469, never designated there as a scultore but as a stone-cutter or marble-worker. Nevertheless, he is credited with designing Palazzo Isolani on Piazza Santo Stefano, which was built between 1451-55. 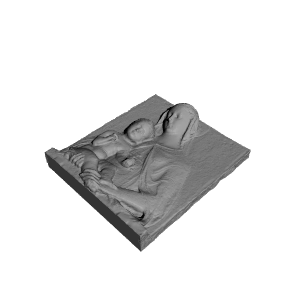