3D
Scan The World
2,144 views 114 downloads
Community Prints Add your picture
Be the first to share a picture of this printed object
0 comments

This Madonna and child statue is marked by the tenderness between the mother and her baby. The baby's grasping of his mother's veil is a typical reflex for small children, and can be observed on every child. In this type of Madonna the humanity of both characters is highlighted: neither of them has a halo around his head, nor a specific attribute linking them to divinity. This kind of Madonna and child essentially appeared in the 14th century and became more and more popular until the 19th century. 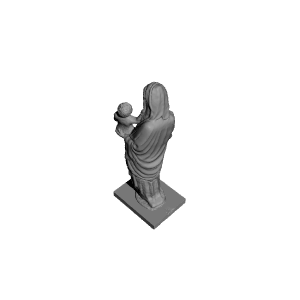