3D
Scan The World
1,885 views 130 downloads
Community Prints Add your picture
Be the first to share a picture of this printed object
0 comments

This relief, originally embellished with colours of which only a few traces remain today, depicts the Madonna and Child in the typical pose favoured by Verrocchio and his workshop: the Child is standing on a cushion, held gently by his mother, portrayed in three quarters. The folds of the Virgin's mantle, sculpted with deep chiaroscuro effects, generate the idea of the loving movements of the mother towards her son, depicted as a delicate, natural infantile nude. The hint of a vague smile on Madonna's face later became a constant in Leonard's paintings. 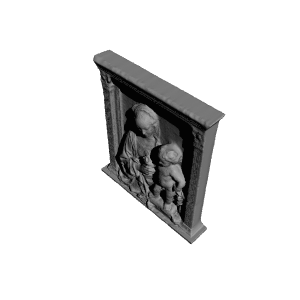