3D
Scan The World
1,670 views 69 downloads
Community Prints Add your picture
Be the first to share a picture of this printed object
0 comments

The Madonna of Žinkovy acknowledges the rich tradition of the French sculpting intermediated by the regions of Upper Rhineland and Southern Germany. The modelling of the head and the position of Christ are related to the works of the master oft he Madonna of Michle. The bird Christ holds in His hand anticipates the future suffering of the Saviour: The legend has it that the bird picked at the thorn of Christ when He was on His way to the Mount of Calvary. The symbol first appeared in Bohemia in the early 14th century as an illumination in the manuscript of Elizabeth Rejčka, the Bohemian Queen marries to Wenceslas II: beginning of the 14th century. 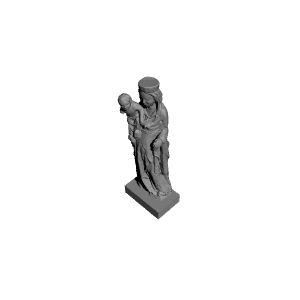