3D
Scan The World
1,428 views 54 downloads
Community Prints Add your picture
Be the first to share a picture of this printed object
0 comments

The statue is a core work of a more numerous group of wood-carvings in the typical style influenced by the West European type of linearly phrased structure of the richly draped robes. The starting point for this style was influenced by the central France and it was mediated by the school of Central Rhineland (Strasbourg). The types of the faces refer to possible links with the Bohemian environment. The author himself came from the Danube region or from Southern Germany. The activity of the sculpture is assumed to be connected with the young Charles IV. The work of this outstanding woodcarver can be accounted with not only in the Bohemian hands but in the wider Central European regions (such as, Upper Austria and Cracow regions.) 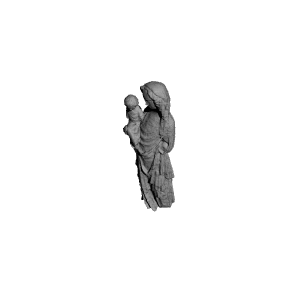