3D
Featured Scan The World
7,127 views 997 downloads
8 collections
Community Prints Add your picture
Be the first to share a picture of this printed object
0 comments

This plaster cast is a direct copy of the original marble Madonna della Scala (Madonna of the Stairs). It is one of the earliest works of Michelangelo, created when he was about seventeen.

The work is an obvious homage to stiacciato of Donatello, as Vasari also noted, both in technique and sizes plans with millimeter thickness variations, both in iconography, starting from the scale pattern with pronounced steps and handrails foreshortened, visible for example in the Feast of Herod in Lille, smashing spatially opening a path of dramatic vanishing.

The waxy, translucent slab, like alabaster, is reminiscent of Desiderio. Carved in "rilievo schiacciato" it represents Michelangelo's exploration of quattrocento techniques. In both form and content we see the influence of Greek "stelai". The Madonna's face is in classical profile and she sits on a square block, Michelangelo's hallmark. He chose not to show the Child's face but placed him in an odd position, either nursing or sleeping and encased in drapery, suggesting protection. In the background, four youths handle a long cloth, identified either the one used to lower Christ from the cross or a shroud.

In Madonna of the Stairs, Michelangelo used the chisel more as a pencil to create the illusion of the Madonna's gown as it barely rises from the background. By subtly dissolving the barrier between object and background, the artist introduces dimension and depth as mere suggestions. The classical Roman character of Mary's profile finds its roots in fifth-century Greek grave designs.

Extraordinary in Madonna of the Stairs is the fully mature, muscular power of the Christ Child's right arm and back, a pose that would be echoed in the sculpture Day in the Medici Chapel. 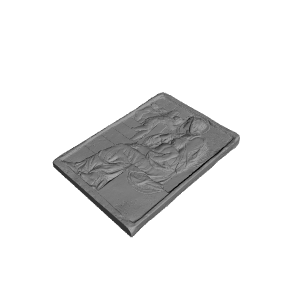