3D
Scan The World
2,501 views 90 downloads
1 collection
Community Prints Add your picture
Be the first to share a picture of this printed object
0 comments

Iconographic type of the Madonna Protectress belongs to the devotional images popular in the late Middle Ages in Western Europe. The roots of the legend of Mary's protective mantle which provides shelter to those collected beneath it go nevertheless back to Constantinople in the 10th c. There was kept the relic of Mary's mantle that protected the city from invaders. From the 13th c. this image was spread in the western world. There it conforms to the old Germanic legal concept of asylum which may provide the offender refuge under the mantle of the noble lady. Under the influence of endless wars, proliferating heresies and repeated famines and epidemics of the plague in the 15th c. the idea of God the Father was developed, who - as a punishing judge - throws arrows of doom at the unworthy humanity. From his anger protects the intercession of the Virgin Mary metaphorically expressed as the protective power of her mantle. Therefore it is not surprising that the only whole preserved artwork of this topic in Bohemian medieval carving dates back to the aftermath of the Hussite Wars - the period in which was in a Catholic environment Mary's shelter often invoked.

Protectress from Kostelec has gracefully curved slender body, refined gooseneck and lovely oval face. This all is the heritage of a carving of the International Style. Supplicants of both genders are gathering under Mary's mantle, symbolizing all sorts of medieval society - from king and queen across the high clergy to the low-born citizenry. Some of their greatly cut faces are going in an attempt to capture the individual, unnormalized features to the boundary of naturalism. The valuation of these fine qualities is also allowed by the recent restoration which stripped the statue its unsightly younger coloured veneer. 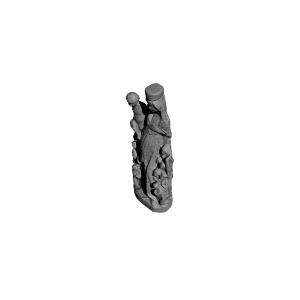