3D
Scan The World
2,071 views 79 downloads
Community Prints Add your picture
Be the first to share a picture of this printed object
0 comments

It's uncommon for a maened to be represented without any snakes around her. It's an exception made by the artist. In this aspect, the statue is very original. Also, we can see a missing right hand, we do not know if it's wanted or no.

In Greek mythology, maenads were the female followers of Dionysus and the most significant members of the Thiasus, the god's retinue. Their name literally translates as "raving ones." Maenads were known as Bassarids or Bacchantes in Roman mythology after the penchant of the equivalent Roman god, Bacchus, to wear a bassaris or fox-skin. Often the maenads were portrayed as inspired by Dionysus into a state of ecstatic frenzy through a combination of dancing and intoxication. During these rites, the maenads would dress in fawn skins and carry a thyrsus, a long stick wrapped in ivy or vine leaves and tipped with a pine cone. They would weave ivy-wreaths around their heads or wear a bull helmet in honor of their god, and often handle or wear snakes.

More about the artist

Nice elegant print that requires supports and a brim. 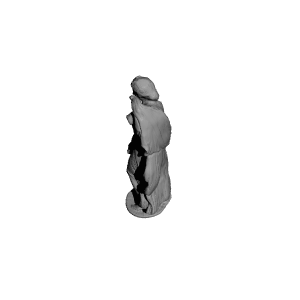 ×
0 collections where you can find Maenad by Scan The World