Mafalda and Friends at History Road in Buenos Aires, Argentina

Mafalda and Friends at History Road in Buenos Aires, Argentina

Mafalda is a comic strip written and drawn by Argentine cartoonist Joaquín Salvador Lavado, better known by his pen name Quino. The strip features a 6-year-old girl named Mafalda, who reflects the Argentinian middle class and progressive youth, is concerned about humanity and world peace, and has serious attitude problems but in an innocent manner. The strip ran from 1964 to 1973 and was very popular in Latin America, Europe, Quebec and Asia, leading to two animated cartoon series and a book. 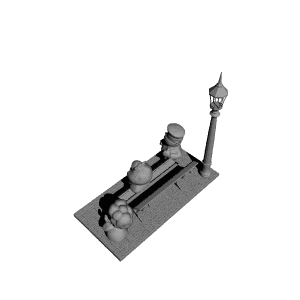 ×
4 collections where you can find Mafalda and Friends at History Road in Buenos Aires, Argentina by Pallavi
×
Zarbuta
@zarbuta
2
Printed on: Prusa i3 MK3
Material: PLA
Posted at: 29th July 2018

I always been a fan of Mafalda. Thanks to everyone involved in bringing this model to the 3D printing world (Quino, Pablo Irgang, scan the world). Splitted the model in parts, printed at 200% with support, sanded, painted.