This is a Magpi-drinkcoaster. Magpi is a magazine with news, projects and tutorials about the raspberry pi. Raspberry pi is a cheap minipc that can also be used for programming simple and complex electronic projects. I use my raspberry pi 3B+ for programming an arduino. I have got an arduino in the usb port of the pi and arduino IDE on the raspbian OS. I program litte stuff like buttons, leds and sensors.

Use these coaster to place your favourite drink. If you have printed it, don't hesitate to show of your skills and upload a picture.

The MagPi is a free fanzine for users of the Raspberry Pi computer. It was created by the community as an unofficial volunteer produced Raspberry Pi publication and in 2015 was handed over to the Raspberry Pi Foundation to be run in-house as the official Raspberry Pi magazine. It was launched in May 2012 and contains news, projects and tutorials.

I have printed this model with Ultimaker white PLA and Ultimaker silver metallic PLA. I used 0.2mm layer height and, 18% infill. I used a 0.4mm nozzle with my extruder at 210 degrees Celcius. I used a heated bed. To avoid the curling up at the bottom i used a brim. I paused the print at the point when the text began, changed filament, and resumed the print. 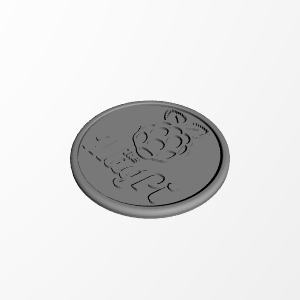 ×
1 collections where you can find Magpi-drinkcoaster by Idea Lab