3D
Featured Scan The World
3,956 views 328 downloads
2 collections
Community Prints Add your picture
Be the first to share a picture of this printed object
0 comments

Mahavira, Jnn, Gujarat, India, 1470, Jasper, represents the 24th tirthankara or spiritual master of Jainism. Museum of Cinquentenaire (Brussels, Belgium). Made with ReMake and ReCap from AutoDesk.

Jainism, traditionally known as Jain Dharma, is an ancient Indian religion. Jainism followers are called “Jains”, a word derived from the Sanskrit word jina and connoting the path of victory in crossing over life’s stream of rebirths through an ethical and spiritual life. Jains trace their history through a succession of twenty-four victorious saviors and teachers known as Tirthankaras, with the first being Rishabhanatha, who is believed to have lived millions of years ago, and twenty-fourth being the Mahavira around 500 BCE. 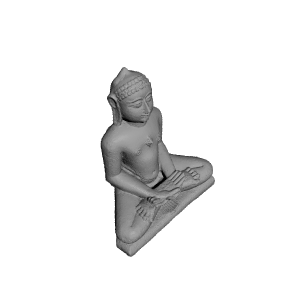 ×
2 collections where you can find Mahavira by geoffrey.marchal