3D
360°
Scan The World
1,837 views 159 downloads
1 collection
Community Prints Add your picture
Be the first to share a picture of this printed object
0 comments

Maiastra is Brancusi's first sculpture of a bird. Its title refers to a mythical creature from Romanian legend. Carved from white marble, the work's streamlined form accentuates the bird's elongated neck, swollen chest, and tail feathers, imparting a regal elegance commensurate with the subject on which it is based. Maiastra sits perched on a tall tripartite limestone base, the central component of which began as a freestanding sculpture of two figures bearing a stone on their heads, called Double Caryatid. (A caryatid is an architectural support typically carved in the form of a woman.) Maiastra marks the first time the artist incorporated an existing sculpture into a pedestal, a practice he would continue throughout his career. 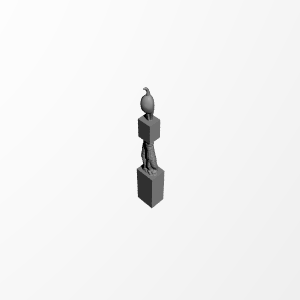 ×
1 collections where you can find Maiastra by CEG