3D
Scan The World
5,587 views 542 downloads
1 collection
Community Prints Add your picture
Be the first to share a picture of this printed object
0 comments

In 1905 Auguste Rodin arranged a meeting between Maillol and the German diplomat and collector Count Harry Kessler (1868-1937) at the shop of the Parisian art dealer Ambroise Vollard (1866-1939). In the following years, Count Kessler did much to further Maillol's success as a sculptor, and in 1908 he took Maillol on a tour of Greece. Maillol had, in fact, already begun to draw heavily on antique sculptural sources for his models, but chose to apply only the structural principles of Greek sculpture to his monumental female nudes.
Summer is one of the four life-sized personifications that were commissioned by the Russian collector of avant garde art Ivan Morozov (1871-1921) on the recommendation of the Nabis artist Maurice Denis (1870-1943). The series, modeled between about 1910 and 1912, included female figures of Spring, Flora, and Pomona. All four were displayed in the music room of Morozov's mansion in Moscow among the panels painted by Denis. Morozov's bronze, now in the Pushkin Museum in Moscow, was delivered to him in 1912, the Metropolitan Museum's bronze is believed to have been cast for Maillol, himself, and is perhaps earlier in date than the Morozov bronze.

Cura did not add sufficient support for right hand and left elbow so this needs to be added prior to slicing. Otherwise, this object does not require any further considerations. 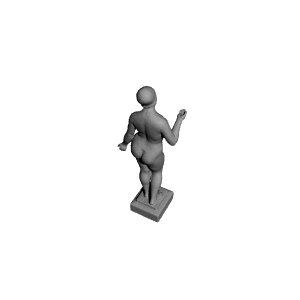 ×
1 collections where you can find Summer at The Jardin des Tuileries, Paris by Scan The World