Makara (Sanskrit: मकर) is a sea-creature in Hindu mythology. It is generally depicted as half terrestrial animal in the frontal part, in animal forms of an elephant, crocodile, stag, or deer, and in the hind part as an aquatic animal, in the form of a fish or seal tail. Sometimes, even a peacock tail is depicted.

Makara is the vahana (vehicle) of the Ganga - the goddess of river Ganges (Ganga) and the sea god Varuna. It is also the insignia of the love godKamadeva. Kamadeva is also known as Makaradhvaja (one whose flag a makara is depicted). Makara is the astrological sign of Capricorn, one of the twelve symbols of the Zodiac. It is often portrayed protecting entryways to Hindu and Buddhist temples.

Makara symbolized in ornaments are also in popular use as wedding gifts for bridal decoration. The Hindu Preserver-god Vishnu is also shown wearing makara-shaped earrings called Makarakundalas. The Sun god Surya and the Mother Goddess Chandi are also sometimes described as being adorned with Makarakundalas. 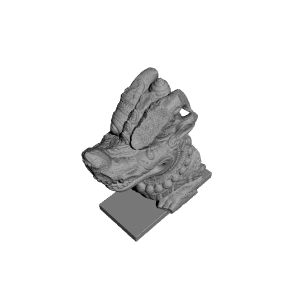 ×
10 collections where you can find Makara Dragon at The Guimet Museum, Paris by Scan The World
×
TreeD Filaments
@TreeD
1
Printed on: Zortrax M200
Material: Others
Posted at: 15th March 2016

Printed with Clay by TreeD filaments