3D
Scan The World
3,269 views 140 downloads
4 collections
Community Prints Add your picture
Be the first to share a picture of this printed object
0 comments

Cast from an original carving in lignum vitae of the same name, Makutu takes its title from Maori. According to an earlier Tate Gallery catalogue entry, the word means 'to bewitch; a spell or incantation; and also a variety of sweet potato' . It is probable that Hepworth would have chosen it for the more abstract and mysterious definitions. In 1966 she had given a slate carving the title Two Forms (Maori). In answer to an enquiry from a Tate curator, Alan Bowness, the artist's executor, suggested that the title Makutu might have been taken from a book that was sent to the artist and was now in his own collection. 'Finding names was often a bit of a problem', he explained. The title's allusion to magic and mystery may be compared to a metaphysical quality suggested by many of Hepworth's works. Several titles include references to religious themes - Christian, non-Christian and pagan - and to ritualistic activity in general, such as Three Forms Vertical (Offering), 1967 and three separate works with the sub-title 'amulet', meaning a charm.

The hollow cast bronze is typical of Hepworth's work in a number of ways. Its basic form is that of the original log with the edges rounded. It is pierced once and, while the exterior is dark bronze, the internal surfaces have a pale green patination that becomes heavier towards the bottom. The hole narrows to a tilted, more regular oval shape at the back. After its acquisition by the Tate, the sculpture was cleaned of marks resulting from its display out of doors, such as bird lime, and wax-polished. The original bolts holding it to the base were replaced with stainless steel (Tate Gallery conservation files). 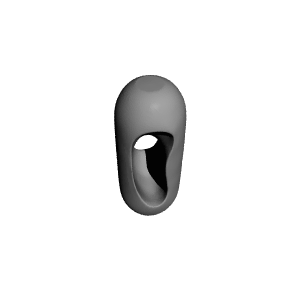 ×
4 collections where you can find Makatu at Christchurch Mansion, Ipswich by Scan The World