3D
Scan The World
2,173 views 77 downloads
Community Prints Add your picture
Be the first to share a picture of this printed object
0 comments

Pakpak or Pakpak Dairi people are one of the ethnic group of Batak people (hence also known as Batak Pakpak) found mainly in North Sumatra, Indonesia. They are scattered in a few regencies and cities in North Sumatra and Aceh, such as Dairi Regency, Pakpak Bharat Regency, Humbang Hasundutan Regency and Central Tapanuli Regency of North Sumatra, and also in Aceh Singkil Regency andSubulussalam, Aceh. In administrative governance, most of the Pakpak people settled in Dairi Regency,North Sumatra, which later in 2003 grew into two regencies, namely: Dairi Regency and Pakpak Bharat Regency.  The Pakpak people are most likely the descendents of the soldiers from Chola Kingdom, India that attacked Srivijaya Kingdom in the 11th century.

The Pakpak people are bound by a social structure, which in local terminology is called sulang silima. Sulang silima consists of five elements that are: Sinina tertua (descendants or older generations), Sinina penengah (descendants or middle generations), Sinina terbungsu (youngest generation), Berru (Kinsmen who receive women into their family) and Puang (Kinsmen who give women into another family). Five of these elements are very instrumental in decision making in various aspects of life especially in kinship system and traditional ceremonies, be it in the context of a single surname clan based community (Lebbuh) or village based community (Kuta). Therefore, five of these elements must be involved in order for a decision to be considered as valid in customary terms. Traditional Pakpak ceremonies are named with "working" terms, however the term "festivals" are also frequently used today. 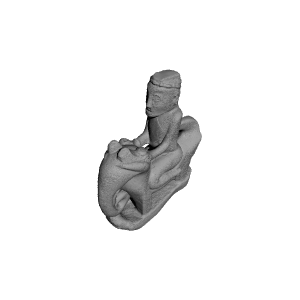 ×
0 collections where you can find Male Figure at Quai Branly, Paris by Quai Branly