3D
Scan The World
1,535 views 65 downloads
Community Prints Add your picture
Be the first to share a picture of this printed object
0 comments

Sergei Konenkov's life and career provide a unique perspective on art in the twentieth century. The most promising sculptor of his generation in Tsarist Russia and a leading figure in the young Soviet art establishment of the early 1920s, Konenkov was to spend over two decades in the west, as a familiar figure in New York Greenwich Village art scene, only to return at Stalin's invitation to the SOviet Union, where he became known as the doyen of Soviet sculpture. From experimental modernism to sentimental academis, internsive personal vision that became increasingly visionary. Throughout his student years, the sculptor absorbed a host of new sculptural impressions. He was awarded a trip to Italy and France, he return back to Russia so inspired by classical sculpture: a marble fragment might suggest a more expressive entity than an intact figure could ever do. This head of a not identified man is part of 1910s production in which the artist explored the creation of fragments as total art objects. He carved a number of heads that conveyed the impression of being all that remained of much ;arger pieces of sculpture. 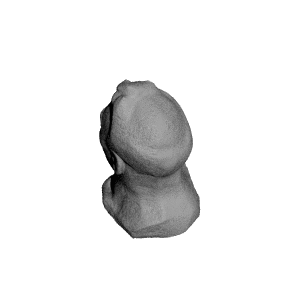