3D
Scan The World
1,643 views 56 downloads
Community Prints Add your picture
Be the first to share a picture of this printed object
0 comments

The head belonged to a partially-nude statue of which only a few fragments have been found. It was based on the model created by the Greek sculptor Lysippos (IV century B.C.) for a portrait of Alexander the Great. The half-open mouth and twisted neck give the face a pathetic air. This figure represents a Roman "powerful man"who, like others, ahows his importance by aligning his apparence with the iconographic tradition of Hellenistic dynasties. It dates to around the end of the II century B.C. 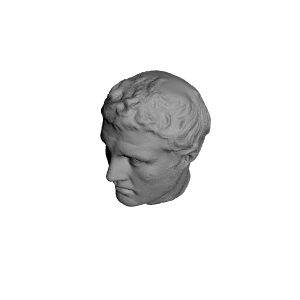