3D
Scan The World
2,752 views 119 downloads
2 collections
Community Prints Add your picture
Be the first to share a picture of this printed object
0 comments

Statues of men wearing crowns made of leaves are the most common images of male worshippers on Cyprus from around 600 BC until Roman times. The laurel of myrtle leaves may refer to the cult of Apollo, especially as worshippers are often shown holding branches of similar plants. This head combinjes Persian artistic traits, especially the snail-curls on the beard, with Archaic Greek features such as high cheekbones and a slight smile.

From Dali, the Sanctuary of Apollo-Reshef

Printed at 50% this is a handsome bust. Care should be taken with the support for the beard as it may tend to break loose from the print bed. All of the rest of the print is very easy. 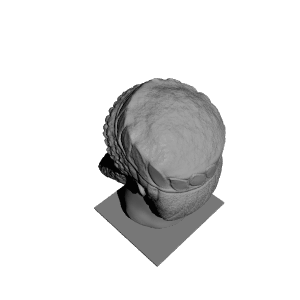