3D
Scan The World
2,739 views 93 downloads
Community Prints Add your picture
Be the first to share a picture of this printed object
0 comments

The maleo (Macrocephalon maleo) is a large megapode and the only member of the monotypic genus Macrocephalon. The maleo is endemic to the Indonesian island of Sulawesi. It is found in the tropical lowland and hill forests, but nests in the open sandy areas, volcanic soils or beaches that are heated by the sun or geothermal energy for incubation.

The maleo ranges from 55–60 cm long with blackish plumage, bare yellow facial skin, reddish-brown iris, reddish-orange beak and rosy salmon underparts. The crown is ornamented with a black helmet casque. The greyish blue feet have four long sharp claws, separated by a membranous web. The sexes are almost identical with a slightly smaller and duller female. Juveniles have largely brownish and paler heads with short blackish-brown crests and browner upperparts.

The maleo's egg is large, about five times as large as that of the domestic chicken's. The female lays and covers each egg in a deep hole in the sand and allows the incubation to take place through solar or volcanic heating. After the eggs hatch, the young birds work their way up through the sand and hide in the forest. The young birds are able to fly and are totally independent. They must find food and defend themselves from predators such as monitor lizard, reticulated python, wild pig and cats.

The maleo is monogamous, and members of a pair stay close to each other all the time. Its diet consists mainly of fruits, seeds, mollusks, ants, termites, beetles and other small invertebrates.

This species is endemic to the Indonesian island of Sulawesi. It is usually not present on altitudes exceeding 1,000 meters, and is usually found in lowland hills or rain forests. Ideal nesting locations include river banks, lake shores, and coastal areas of the island. Maleos are communal nesters.

Maleo birds breed all year round, but peak breeding season varies depending upon the location on the island. When prepared to lay her eggs, the female maleo bird, accompanied by her mate, will leave the cover of Sulawesian forest in search of historic coastal breeding grounds. Females can lay anywhere between 8-12 eggs over the course of a year. Once an optimal spot is chosen, the maleo dig a deep hole and lay the egg inside. After the egg is laid, the parents bury the egg securely in sand, sometimes covering the sand with other debris to better camouflage the hole. After the egg has been securely buried, the parents leave and never return, leaving the maleo chick to fend for itself.

The hot sand of Sulawesi acts as an incubator for maleo eggs, which are warmed with geothermal heat or solar heat. A maleo chick is completely self-sufficient only hours after hatching. For this reason, maleo eggs are approximately five times the size of a domestic chicken’s, as they contain nearly full-formed maleo birds inside. It must dig its way up through the sand immediately after birth, and subsequently has the ability to fly and feed itself. 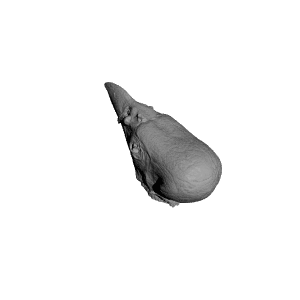 ×
0 collections where you can find Maleo head by NaturalHistoryMuseum