3D
Scan The World
2,136 views 122 downloads
4 collections
Community Prints Add your picture
Be the first to share a picture of this printed object
0 comments

The woolly mammoth (Mammuthus primigenius) is an extinct species of mammoth that lived during the Pleistocene until its extinction in the early Holocene epoch. It was one of the last in a line of mammoth species, beginning with Mammuthus subplanifrons in the early Pliocene. The woolly mammoth diverged from the steppe mammoth about 400,000 years ago in East Asia. Its closest extant relative is the Asian elephant. The appearance and behaviour of this species are among the best studied of any prehistoric animal because of the discovery of frozen carcasses in Siberia and Alaska, as well as skeletons, teeth, stomach contents, dung, and depiction from life in prehistoric cave paintings. Mammoth remains had long been known in Asia before they became known to Europeans in the 17th century. The origin of these remains was long a matter of debate, and often explained as being remains of legendary creatures. The mammoth was identified as an extinct species of elephant by Georges Cuvier in 1796.

This is the 1st lumbar vertebra of the adult Shropshire mammoth. Imaged using a Canon 5DS R and Stackshot 3x with a turntable to provide 108 images which were then processed using agisoft photoscan at high levels. 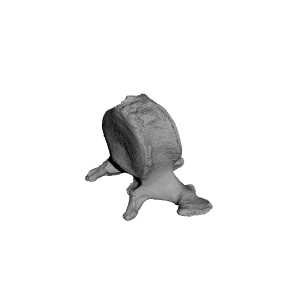 ×
4 collections where you can find Mammuthus primigenius by fossilsinshropshire