3D
Scan The World
3,166 views 330 downloads
1 collection
Community Prints Add your picture
Be the first to share a picture of this printed object
0 comments

The sculpture shows a sitting man with a crouched-up, frail woman in his lap. Holding his arms around her, he bends down so that his forehead touches her head. It seems as though the two nude figures are uniting in a relationship of love, comfort, and protection.

Gustav Vigeland created Man and Woman in 1905. A bronze moulding was exhibited at Blomqvist’s the following year, prompting the art historian Carl W. Schnitler to write an extensive newspaper article where he contended that the sculpture might at first glance appear brutally repulsive, and that it represented a complete break from the classical concepts of beauty. Schnitler argued nonetheless that it was great art and that Vigeland’s works were full of vitality, character, and contemplation.

Several versions of this motif exist, all highly dissimilar in form and appearance. The National Museum’s version, created at a time when Vigeland favoured a naturalistic idiom, features slender forms and clearly articulated anatomic details. At the same time, the sculpture’s somewhat uneven surface reflects the light in a way that adds light and movement.

The same year that Vigeland fashioned Man and Woman he worked on plans for the fountain that would later on form the core of the Vigeland Park in Oslo, and the sculpture’s style resembles that of the earliest fountain sculptures. The relationship between men and women is also a central theme of the fountain and the other works in the park.

This object was scanned by John Greenstone, Norway 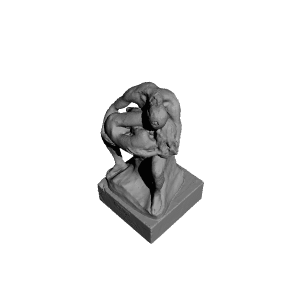