3D
Scan The World
4,014 views 180 downloads
5 collections
Community Prints Add your picture
Be the first to share a picture of this printed object
0 comments

A difficult and dangerous acrobatic feat, bull-leaping is frequently shown in Minoan art, and probably formed a part of ritual activity. The strength and potency of bulls perhaps lay behind their religious importance to the Minoans.

Different leaps are represented. In this version the leaper is somersaulting over the bull's head and landing with both feet on its back.

The sculptor has cleverly supported the acrobat by allowing his long hair to trail onto the bull's forehead. The group is solid cast, in one piece, using the lost wax technique. The arms are not represented, but end in stumps: it is not clear whether this was by design or because the bronze did not flow into the extremities of the mould. Equally, the loss of the lower legs may have been due to a casting fault. Minoan bronzes tended to be poor in tin, which meant the alloy did not flow well, and also gave a characteristic bubbly surface.

It seems highly unlikely that an acrobat could grasp a bull's horns and use the toss of its head to flip over onto its back, because of the unpredictability of the bull's movements.

Perhaps in reality the bulls were restrained or even tamed. Certainly some Minoan representations show bulls being captured, tethered and led, as well as apparently being held by the horns.

It is probable that the Minoans put considerable effort and long experience into the sport, and were able to achieve dramatic effects. Even so, the possibility of some artistic licence in the representations should not be discounted. 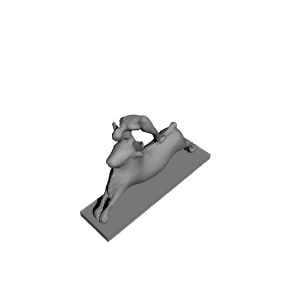 ×
5 collections where you can find Minoan bull leaper at The British Museum, London by Scan The World