3D
Scan The World
5,798 views 603 downloads
2 collections
Community Prints Add your picture
Be the first to share a picture of this printed object
0 comments

Hadrian (24 January, 76 AD – 10 July, 138 AD) was Roman emperor from 117 to 138. He rebuilt the Pantheon and constructed the Temple of Venus and Roma. He is also known for building Hadrian's Wall, which marked the northern limit of Britannia. Hadrian was regarded by some as a humanist and was philhellene in most of his tastes. He is regarded as one of the Five Good Emperors.

Hadrian was born Publius Aelius Hadrianus into a Romanized family from Hispania of only partial known Italian ancestry. Although Italica near Santiponce (in modern-day Spain) is often considered his birthplace, his place of birth remains uncertain. However, it is generally accepted that he comes of a family with centuries-old roots in Hispania. His predecessor Trajan was a maternal cousin of Hadrian's father. Trajan never officially designated an heir, but according to his wife Pompeia Plotina, Trajan named Hadrian emperor immediately before his death. Trajan's wife and his friend Licinius Sura were well-disposed towards Hadrian, and he may well have owed his succession to them. 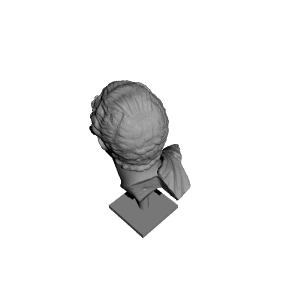 ×
2 collections where you can find Marble bust of Hadrian at the MET, New York by Metropolitan Museum of Art