Marble Head from the Sanctuary of Eshmun

3D
Scan The World
1,360 views 58 downloads
Community Prints Add your picture
Be the first to share a picture of this printed object
0 comments

Marble Head from the Sanctuary of Eshmun

This head originates from The Temple of Eshmun, an ancient place of worship dedicated to Eshmun, the Phoenician god of healing. It is located near the Awali river in southwestern Lebanon.

Apart from the large decorative elements, carved friezes and mosaics which were left in situ, many artifacts were recovered and moved from the Eshmun Temple to the national museum, the Louvre or are in possession of the Lebanese directorate general of antiquities. Some of these smaller finds include a collection of inscribed ostraca unearthed by Dunand providing rare examples of cursive Phoenician writing in the Phoenician mainland.

This marble head of a child was found at the Eshmun Temple site, originating from the 4th century BC. 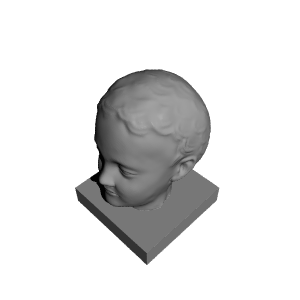