Marble Head of a Apollo

3D
360°
Featured Scan The World
1,885 views 163 downloads
3 collections
Community Prints Add your picture
Be the first to share a picture of this printed object
0 comments

Marble Head of a Apollo

Apollo is depicted with his head dramatically turned to his right, on a long neck. His idealized classically-inspired visage displays large almond-shaped eyes beneath gently arching brows and a spade-shaped forehead. His cheeks narrow to his pronounced chin with parted bow-shaped lips above. His luscious thick hair is deeply drilled, fashioned in a center part and bound in a diadem. The locks are rolled back over the tops of his ears and the diadem, and bound in a chignon at the nape of his neck. A wavy tendril is positioned before each ear on his cheek.

Jucker (op. cit.) observes that the presence of two mortises high on the crown indicates that the figure once wore a top knot, supporting the indentification of Apollo. And without ivy or berry, a Dionysian association seems unlikely. The present sculpture is related to a number of Apollo Kitharoidos-type figures based on a Hellenistic original. For a similar example now in the Istanbul Archaeology Museum, see no. 61a in G. Bauchhenss, "Apollon/Apollo," LIMC, vol. 2. 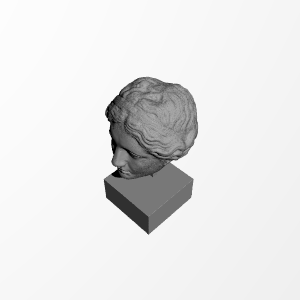