Marble head of a Bearded Man at The Metropolitan Museum of Art, New York

3D
Scan The World
1,965 views 64 downloads
1 collection
Community Prints Add your picture
Be the first to share a picture of this printed object
0 comments

Marble head of a Bearded Man at The Metropolitan Museum of Art, New York

Since eight other Roman copies of this Greek portrait type are known, it probably represents a famous or influential figure. Although there is no evidence or identification, some scholars have suggested that the original statue portrayed the Athenian lawgiver Solon, one of the Seven Sages famed in antiquity for practical wisdom. This head is one of the most sensitive and crist likeness in the Metropolitan's collection of Roman copies of Greek portraits. 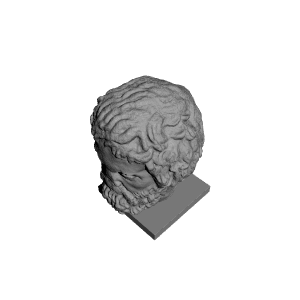