Marble Head of Herodotos at The Metropolitan Museum of Art, New York

3D
Scan The World
3,058 views 204 downloads
Community Prints Add your picture
Be the first to share a picture of this printed object
0 comments

Marble Head of Herodotos at The Metropolitan Museum of Art, New York

Herodotos (ca. 484-424 B.C.) of Halikarnassos achieved fame in his lifetime for his Histories, which chronicle the Greek wars with Persia in the first quarter of the fifth century B.C. and the years surrounding those momentous events. His most brilliant and original accomplishment was his conception of a narrative that interweaves local traditions in a span of more than seventy years and encompasses much of the world known to the ancient Greeks through fact and fiction. Cicero called him the father of history. This work is one of numerous extant Roman copies that stem from a Greek statue, probably of the first half of the fourth century B.C. Portraits of Herodotos also appear on Roman bronze coins from Halikarnassos. 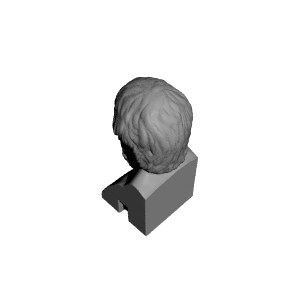