Marble Portrait Bust of Matidia at The Metropolitan Museum of Art, New York

3D
Scan The World
2,510 views 80 downloads
Community Prints Add your picture
Be the first to share a picture of this printed object
0 comments

Marble Portrait Bust of Matidia at The Metropolitan Museum of Art, New York

Numerous portraits of this young woman with a crescent shaped hairpiece decorated with a distinctive looped pattern have been found in various parts of the Empire. She resembles Sabina, wife of the emperor Hadrian, but is probably her elder sister, Matidia the Younger. This bust is partially covered with the same dark sinter as that of Sabina. Depending on the conditions in which they are buried, ancient sculpture often has heavy incrustation on some parts and an almost intact surface on other parts.

(source; accompanying text at The Metropolitan Museum of Art) 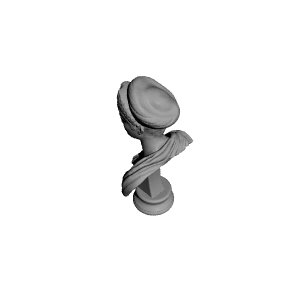