3D
360°
Featured Scan The World
1,485 views 104 downloads
1 collection
Community Prints Add your picture
Be the first to share a picture of this printed object
0 comments

As P. Zanker observes, in the 3rd century, competition among varied, complex hairstyles played a lesser role and simpler coiffures were favored in portraits of women (see p. 192 and cats. 87-89 in Roman Portraits: Sculptures in Stone and Bronze in the Collection of the Metropolitan Museum of Art). In contrast, the hairstyle seen in this fine portrait with the proper-right length swept up and twisted into a bun, recalls earlier styles seen in depictions of the Empress Sabina and can be understood as a reflection of the classicizing tendencies that were popular under the reign of the Emperor Gallienus (r. 253-268; see nos. 10-11 in K. Fittschen and P. Zanker, Katalog der römischen Porträts in den Capitolinischen Museen und den anderen kommunalen Summlungen der Stadt Rom, Band III).

Jucker (op. cit.) considers this head to be a masterpiece of late Roman portraiture; that even in the crisis-ridden 3rd century sculptors produced high-quality works that were both captivating and technically advanced. 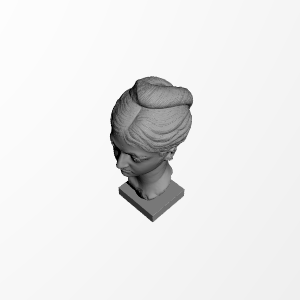