3D
360°
Featured Scan The World
1,244 views 56 downloads
1 collection
Community Prints Add your picture
Be the first to share a picture of this printed object
0 comments

Jucker (op. cit., p. 39) proposes that this fine portrait of a young girl relates to three heads from Corinth, including one now in Boston (no. 353 in M.B. Comstock and C.C. Vermeule, Sculpture in Stone: The Greek, Roman and Etruscan Collections of the Museum of Fine Arts, Boston). The Acrocorinth was home to a sanctuary of Demeter since at least the 7th century B.C. and which flourished into the Roman period. These portraits likely represented young priestesses or attendants of the goddess. That such high-quality craftsmanship flourished in Corinth during Hadrian's reign may have been associated with his passion for Greece and its history, which inspired multiple trips there between 121-134 and his initiation into the Eleusinian Mysteries.

While her piercing almond-shaped eyes and heavy upper lids imbue her with a sense of maturity, her slightly smiling mouth dimpled at the corners convey a youthfulness fitting her age.

Of particular interest is the girl’s elaborate coiffure, crowned with a convex fillet. The girl's face is framed with long undulating locks that are brushed forward and fall along her forehead, with a longer comma-shaped lock curving before her ears. Behind the diadem her center-parted hair is plaited into a melon-coiffure, whose rows terminate in a smaller braid that crowns the back of her head. The fillet is knotted at the nape of her neck, the ties falling below. Jucker (op. cit., p. 39) relates the hairstyle - particularly the arrangement of the crown on the top of the head - to an Imperial portraiture of the 2nd century, especially one of Empress Sabina, Hadrian’s wife (see pls. 12-13 in K. Fitschen and P. Zanker, Katalog der römischen Porträts in den Capitolinischen Museen. 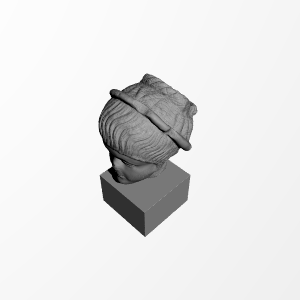