Marble Sphinx on a Cavetto Capital

3D
Scan The World
2,148 views 146 downloads
2 collections
Community Prints Add your picture
Be the first to share a picture of this printed object
0 comments

Marble Sphinx on a Cavetto Capital

This sphinx and capital once crowned the tall grave shaft of a youth or man named Philinos or Thalinos. They belong to the earliest type of grave stele produced in Attica during the sixth century B.C. Stylistically, the sphinx is related to such early statues as the kouros (youth) displayed in the gallery to your left. It has the same four-sided structure with grooved indications of anatomical forms and large, flat, stylized features. In the early Archaic period, Greek sculptors learned much from the Egyptians about carving large-scale stone monuments. The simple concave form of this capital imitates the cavetto molding often found in Egyptian architecture. 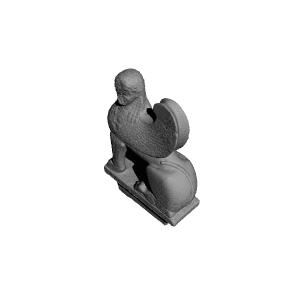