Marble statue of Eirene (the personification of peace)

3D
Scan The World
2,852 views 131 downloads
1 collection
Community Prints Add your picture
Be the first to share a picture of this printed object
0 comments

Marble statue of Eirene (the personification of peace)

Eirene, the daughter of Zeus of Themis, was one of the three Horai (Seasons), maidens closely associated with the fertility of the earth and the nurturing of children. The original bronze was erected in the Agora (marketplace) of Athens between 375-374 and 360-359 BC. Rarely can an ancient monument be dated so exactly. We know from literary sources that the cult of Eirene was introduced to Athens in 375/374, and six recently fount Panathenaic amphorae dated to 360/359 show an image of the statue.

The Greek traveler Pausanius saw the work in the Agora in the secord century A.D. and reported that it was by the sculptor Kephisodotos. Eirene was represented as a beautiful young woman wearing a peplos and himation (cloak), holding a scepter in her right hand, and carrying the young child Ploutos (the personification of wealth) and a cornucopia on her left arm. The figure brings to mind images of Demeter, the major goddess of agricultural plenty and mother of Ploutos. 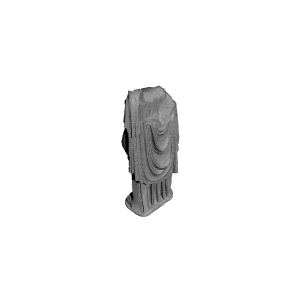