Marble Torso of a Youth

3D
Scan The World
1,799 views 151 downloads
Community Prints Add your picture
Be the first to share a picture of this printed object
0 comments

Marble Torso of a Youth

Beginning in the first century B.C., statues were created in a classicizing style that incorporated or combined elements typical of Greek sculpture of the fifth century B.C. The relative stiffness and lack of organic clarity in this torso suggest that it may be such a work rather than a true copy of a classical Greek statue. The flat, softly rendered planes and polished surface are often found in statues of the Hadrianic and early Antonine periods. 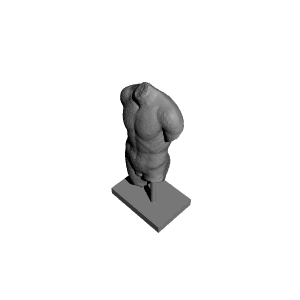