Marble Torso of The Artemis of Ephesus

3D
Scan The World
1,939 views 58 downloads
1 collection
Community Prints Add your picture
Be the first to share a picture of this printed object
0 comments

Marble Torso of The Artemis of Ephesus

The Ephesian Artemis, the "great mother goddess" also mentioned in the New Testament (Acts 19), was extremely popular in the ancient world, as we might deduce from the fact that copies of her cult statue have been excavated in many parts of the Roman Empire.

Although the statue as we know it was a substitute for the lost wooden original which was probably lost after the great fire of 356 BCE, this type retains several archaic traits (e.g., her static pose). Still, many aspects cannot be dated in the archaic age, and the statue from Lepcis that is next to this article illustrates this very well: on the upper part of her chest, she wears a zodiac, a symbol invented in fourth-century Babylonia. On other copies, Artemis wears a mural crown, a Mesopotamian and Syrian motif that became popular in the Hellenistic age. The winged Victories to the left and right appear to be innovations as well, although they have archaic antecedents.

This sculpture was scanned at Masterpiece Fair 2018. The work was being sold for £250,000 and has always been in private collections:

With Elie Borowski, Basel, Switzerland, 1960s
UK Private collection, Mr. B.H., acquired from the above in 1968 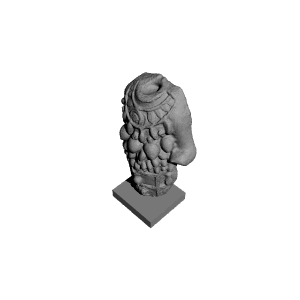