3D
Featured Scan The World
7,753 views 1,333 downloads
6 collections
Community Prints Add your picture
Be the first to share a picture of this printed object
0 comments

This sculpture derives from the original marble housed at The Louvre (MR 315). Formerly considered to represent Germanicus it is now agreed that the work depicts Marcellus the Younger, a Roman consul and nephew of Augustus.

The statue depicts him as an orator in the pose of the Hermes Logios, the god of eloquence. It was executed two years after Marcellus' death, possibly on his uncle's personal order as a funerary monument.

The Hermes Logios (also formerly known as Mercury the Orator) is a Hellenistic sculpture of the god Hermes in his form of a psychopompus, a conveyor or conductor of souls in (or through) the underworld.

The tortoise, on which the Athenian sculptor Cleomenes has signed his work, recalls the invention of the lyre (Hermes made the lyre from a tortoise shell).

"Cleomenes, son of Cleomenes from Athens" 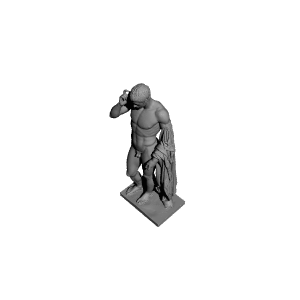