3D
Scan The World
4,365 views 421 downloads
2 collections
Community Prints Add your picture
Be the first to share a picture of this printed object
0 comments

Marcus Aurelius from the equestrian statue in the Capitol, known before 1187. Roman, 170-180 AD Rome, Museo Capitolino. The Royal Cast collection (Copenhagen, Denmark). Made with Memento Beta (now ReMake) from AutoDesk.

Marcus Aurelius 26 April 121 – 17 March 180 AD) was Roman Emperor from 161 to 180 AD. He ruled with Lucius Verus as co-emperor from 161 until Verus’ death in 169. Marcus Aurelius was the last of the so-called Five Good Emperors. During his reign, the Empire defeated a revitalized Parthian Empire in the East: Aurelius’ general Avidius Cassius sacked the capital Ctesiphon in 164 AD. In central Europe, Aurelius fought the Marcomanni, Quadi, and Sarmatians with success during the Marcomannic Wars, although the threat of the Germanic tribes began to represent a troubling reality for the Empire. A revolt in the East led by Avidius Cassius failed to gain momentum and was suppressed immediately. (ref Wikipedia) 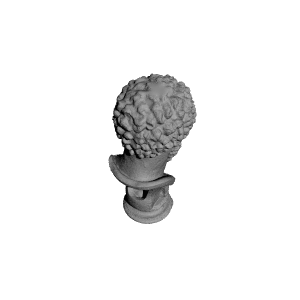 ×
2 collections where you can find Marcus Aurelius by geoffrey.marchal